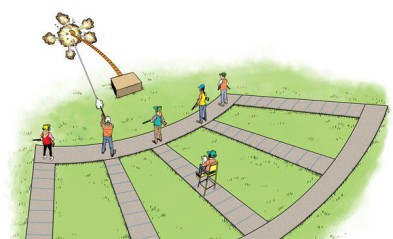 If you have never shot trap, no problem! We can help you learn the basics. NCRGC trap events are generally open to the public and we welcome everyone from beginners that want to learn, to experienced shooters that, when asked, tend to share their wisdom!

What do you need to bring?

Bird or target: a clay pigeon
Post or Station: Refers to the position on the trap field where you stand and shoot.
Squad: The group of shooters that line up on the different posts during a trap event.
Round: One complete cycle consisting of five shots from each of the five posts, which will require 25 shotgun shells and targets.
Pull: The verbal command to call for the target to be released. Other commands may be used.
Change: A command that is called when everyone changes post positions after shooting five shells from a post.

Clay targets are thrown by a trap in a “house” or “bunker” set in the ground at the center front of the trap field. The clay targets fly up and away from the shooters (from beneath and in front of them), who are positioned behind the trap house on the “shooting line.” The targets are thrown from a trap that oscillates from left to right, and because the trap is out of sight from the shooters, the shooters don’t know which angle the target is going to travel until they call for it.

There are five Posts on a trap field. The left position is Post 1 and goes in order to the far-right position, which is Post 5. The first Post 1 shooter is the squad leader. The squad leader always shoots first at each Post. NCRGC only has Posts at 15 yards from the trap house and does not accommodate scoring handicaps.

Making your way around the posts -

After all shooters have fired five shots from their post, the command “Switch” will be given and the shooters all move to the next post and repeat, with the shooter at post 5 moving to post 1.

This repeats until all shooters have finished the round by firing five shots from each of the five posts, totaling 25 shots/targets.

Please familiarize yourself with the Rules & Regulations before attending an event.

We look forward to helping you have a safe, fun, educational and enjoyable experience when you come out to shoot with us. If you have any questions, feel free to send an email to shotgun@ncrgc.org.

Want to learn more about Trap and other upcoming NCRGC events? Visit the NCRGC calendar.