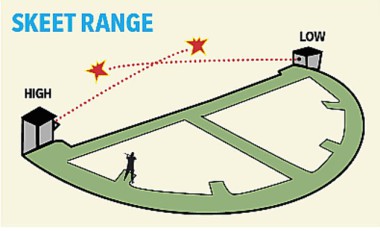 If you have never shot skeet, no problem! We can help you to learn the basics. NCRGC skeet events are generally open to the public and we welcome everyone from beginners that want to learn, to experienced shooters that, when asked, tend to share their wisdom!

What do you need to bring?

Bird or target: a clay pigeon
Stations: The positions at skeet where you will shoot. There are eight Stations in skeet.
Squad: The group of shooters that is moving through the stations together during a skeet event.
Round: One complete cycle of all eight stations which will require 25 shotgun shells and targets.
Pull: The verbal command to call for the target to be released. Other commands may be used.
Option: (shot): The next shot taken after your first miss — at the time you missed and on the station / house, you missed from (e.g., low house or high house).

The sport provides a greater variety of shooting angles than possible with trapshooting as the shooter moves from station to station. In skeet shooting, throwers, or “traps” are set at two points on the field (high house and low house) and targets are always thrown the same direction and height from each house, diagonally across the shooter’s field of vision as well as directly away from him. They targets are launched to a centralized point 15 feet above the ground. The high house launches targets from 10 feet above the ground, while the low house launches targets from 3 feet above the ground.

There are 8 main stations in skeet shooting, with 7 arranged in a semicircle with a radius of 21 yards and the 8th position being halfway between stations 1 and 7. Skeet starts at station 1 which is directly under the high house, and then you work your way around to station 7 by the low house. The round ends at Station 8 in the middle between the high and low houses.

Making your way around the stations -

Do not load you gun until you are on station and ready to shoot. Once that you are loaded and ready for a target (or targets) to be thrown, the standard command is “Pull” (although there are a number of other noises that might be made).

What happens if you miss? Your first miss is repeated immediately at the target thrown from the same house that you just missed and is called an “Option”. You only have one “Option” shot.

This all adds up to 25 targets if your “option” was used. If you were lucky enough to not miss any, you get to shoot an extra target thrown from the low house at station 8 and if you break that clay, you will have a perfect score of 25!

We look forward to helping you have a safe, fun, educational and enjoyable experience when you come out to shoot with us. If you have any questions, feel free to send an email to shotgun@ncrgc.org.

Want to learn more about Skeet and other upcoming NCRGC events? Visit the NCRGC calendar.